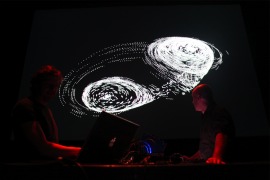 At the Festival Empreintes Numériques, Antoine Schmitt will exhibit seven installations in the Centre Culturel Bellegarde and the Chapelle des Carmélites in Toulouse (France). The opening is on April 10th and Schmitt will play the performance Tempest with Franck Vigroux.

They will also play Tempest in the surprising Festival Störung in Barcelona (Spain) on April 19th. Also, the project Fractal Film with Delphine Doukhan has entered production phase, and a public rehearsal of the shooting will take place on April 13th in Nantes (France).

From april 10 to may 18, François Zajéga is on show at Galerie Charlot. We expect a development of his project towards more substance.
More on Zajéga , on Galerie Charlot.