Hierarchical organizations express themselves as well in political structures as in intellectual contraptions (theological "summae"). They manage and crown the intense activity of universities, dealing with all the "arts". The arts themselves find their synthetical order in the large city cathedrals. [Panofsky, 2004], [Duby, 1983] or even, on a fiction form, The Pillars of the Earth [Follet, 2007]).  But, in spite of this strong polarization, universities emerge as large and free generative spaces. In some measure, they remain independent of feudal and religious authorities.

The Conciergerie clock in Paris

The clock, built in 1370, is one of the most beautiful machines of this time. Its figures also as a work of art, admirable for its complexity as well as for its precision. The Paris visitors can see a testimony of it in the motto below the Conciergerie clock :
"Machina quae bis sex tam juste dividit hora, justitiam servare monet legesque tueri"
(This machine that, two times six, divides so justly the hours, teaches us to serve justice and protect the law.)

Dante also celebrates the clock in his Divina Commedia : "Then as a clock which calls us, at the time when the God's spouse arises to make matins to her man to love, whereas a part draws and pushes another one, ringing and tinking in tones so suave that the prepared mind swells with love; so saw I the glorious wheel move and tune its voices in a softness that you cannot know but where joy plays for ever".

Text is in strong demand from the University and its thousands of students who demand texts. And more and more long texts, notably with the Summae, couting their pages by thousands. That leads to textual copy more productive that the "meditative" copy of the abbeys. [Panofsky, 2004]. That pushes to more efficient copying techniques that the sacralized and illuminated religious manuscripts. Even the fonts have to be simpler, and that paves the way to the movabe characters of Renaissance. 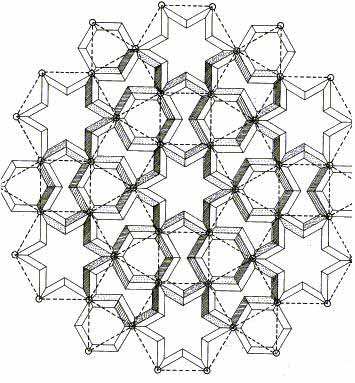 Digital aspects of music progress with the neumatic scoring (Gregorian chant) and the bars, by Guido d'Arezzo. But a more generative approach is taken by Guillaume Dufay in Nuper rosarum flores (1436), an isorhythmic composition based on the ratios 6:4:2:3, corresponding to those of Firenze duomo (according to [Edwards]).
Combinatorial techniques are proposed in 1461 by Jean M eschinot Jean with (rudimentary) stochastic generator of music for his poem Litanies de la vierge, subtitled "A prayer that can ge said by eight or sixteen lines, as well on reverse order than anyway else. See (in French) [Bootz, 2006] and notes MSH Paris Nord.
We see even a first attempt to algorithmic music generation: in 1026, Guido D’Arezzo, besides inventor of bar in musical scoring, has the idea of a composition associating a pitch to each vovel. [Edwards, 2011].
Guillaume Dufay proposes Isoryhmic commpositions.

Graphical representations progress , for example with the schemes of Villard de Honnecourt. (See online comments on them by Viollet-le-Duc). But the Aristotelian syllogism and logic in general offer a proposition generative system. And the algorithms (Gerbert) give "automatically" computed results. Arts take profit of this line of thought, as prove for example the "alicatados" in Grenada's Alhambra or the Seljukid mosaics.

Villard de_Honnecourt, an architect, in his collecion of sketches, may be considered a forerunner in modelling.
Giovanni Fontana builds an ancestor of modern "caves" with his Castellum Umbrarum (1420). Lioret p.116.