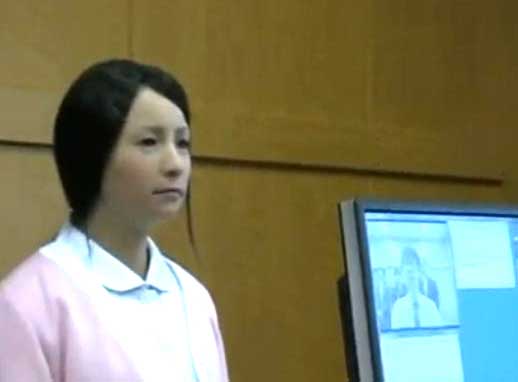 The face of a robot: expression, or absence of? This image is on the blog of Thomas Carrettes. We reach here the uncanny valley

Fax Art. The Métafort d'Aubervilliers hosted an event of this theme on april 1997. See Copy Art.

Features space. An example according to Optical Classification of Water Types based on Remotely-Sensed Ocean Colour, by Linda V. Martin Traykovski and Heidi M. Sosik.

Feed back.
- Basic principle of cybernetics. A case of recursion.
- In interaction programming, see [Thimbleby]. in interaction design see [Janet Murray].
- May be applied to generative art.
. if you consider genetic processes (crossover/fitness) as a kind of feed-back loop,
. if you use the perception/behavior/expression [Aziosmanoff] this way. 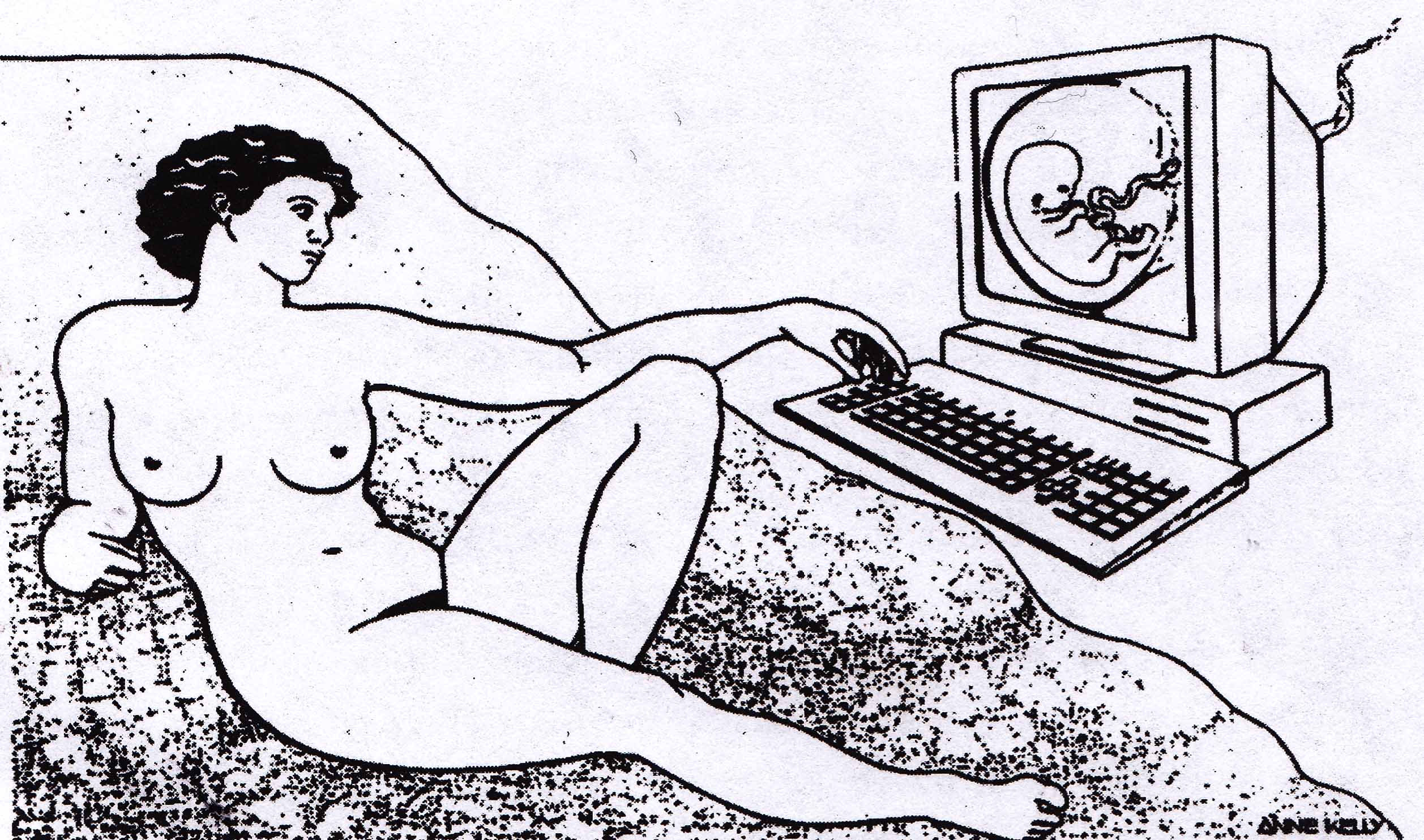 Feminism and cyborgs. This image is reproduced by Dona Haraway (in "Modest Witness... p.176). It comes from the feminist Norwegian magazine Nytt KvinneForskning no3, 1992. Dream, good or bad? Or a major aspect of digital creation in the future? 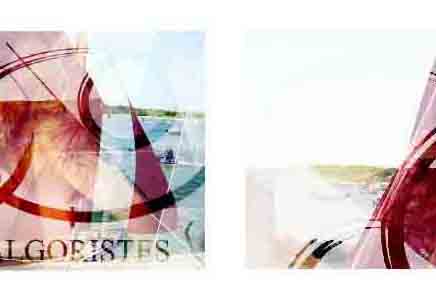 Filters examples using Processing, (presently not operational) here processed in real time by an applet (extract from Roxame), with the source code.

- From an art standpoint, we can rather clearly distinguish two categories of filters: correction and "art effects". The first ones aime to fix the work defects: color dominance, red eyes, backgound nois for sound, possibly non petinent details. Here, the aims are realist or even "photorealist". They apply the scholastic rule of clarity and integrity. The other ones are creative, they go away from the real, even the plausible, in order to get unexpecte results, to show normally hidden parts, to add external objects, etc.
The difference between fixing and creativity could perhaps be analyzed in quantitative terms: a filter is arstisic as far as it makes use of an important memory, affording:
- to process globally a larger part of the input signal (image, sound),
- to use sophisticated models, and possibly to combine the signal with another ones (here we are on the border of compositing),
- to combine all the resources using ligh level computing functions.
- "Art is a bit of nature seen through a temperament" (Emile Zola, Mon salon. Manet. Ecrits sur l'Art. Garnier/Flammarion 1970.

- Pushed to the limit, filters become a game by themselves, a form of art. The subject, the input signal, are reduced to pretexts. The formalist theory of Greenbert could be read with such a meaning. 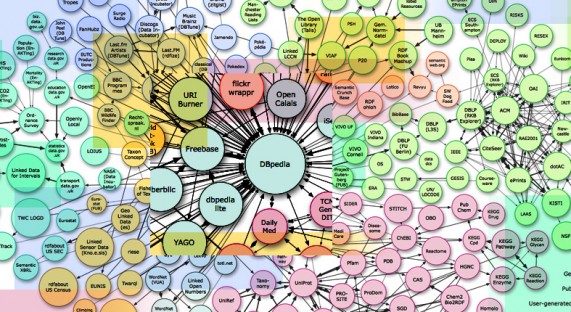 - The semantic web, accorting to the CBlog Culture may be considered a kind of semantic filtering from the "big data".

- Only graphic arts (photo, cinema) and music can use filters in the basic sense. For language, versification rules could be considered a sort of filter. Or the editing of a text by a professional, or even by a spell checker, or the selection of manuscripts by a books publisher or film scenarios by a producer. - In music, filters are often termed "effects".
- In photography and cinema, framing is a kind of filtering, extend by image selection according to the project. On the other hand, compositing and film editing, with global permutations in space and time, go beyond the limits of the concept. Nevertheless, before the digital era, a corporation like Cokin had developped a wide range of optical filters for photography, some ot them creative (for instance with duplication of image parts).
- (Signal processing): a filter is a device which les to only a definite range of frequancy (bandwidth). The impulsional response of a filter may be finite (RIF) or infinite (RII) . See for instance [Bellanger] but also [Oswald], [Bres] [Brinkmann] [Faure-Walker] [Java]... - Long texts in [Cocquerez] [Foley] [Seul]  [Processing]
. Photoshop et les filtres. by V. Risacher. Eyrolles 2001.

See for instance Minel J.-L. (ed.): Filtrage sémantique. De l'annotation à la navigation textuelle. Hermès Lavoisier 2009. The filter concept limits are not easy to draw (or, at least, we have note found the right... filter). The simplest and traditional are the bandwith filters [Photoshop]. Examples of filters in Roxame. Other ones would be
more to be seen as interpreters, if not generative algorithms. 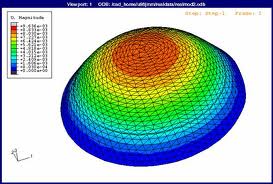 Modelling the cornea into finite elements, according to a document by the Civil Engineering department at University of Oxford.

Finite (elements) [Foley] [Akin]. A large part of these techniques was revised under other headins and for other applicationsat the end of 20th century.

Finery. The decoration of ones own body may be digitgal. See fabric, jewellery.

Finite. (elements) [Foley], [Akin].
- Modelling the cornea into finite elements, according to a document by the Civil Engineering department at University o Oxford.

FIR. A category of filters [Foley]. 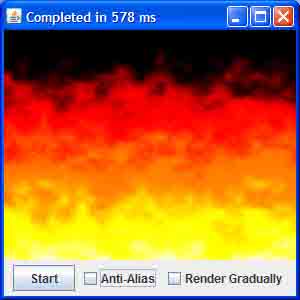 Flake (of snow).
- The " Von Koch" snowflake may be modelled along different ways, explained in [Ebert].


Flat shading. Simple shading, where each polygon has a distinct,but uniform, color.

Focus, focussing.
- [Agoston].
- You can transpose in dibital the classical phogographic method of reduced depth of field in order to keep sharpness only on interesting parts, says [Bres] p. 249. Then you cas say "focus/context". See for instance

Fog.
- Fog machine: a possible effector for scenographies, or even for smaller works, such as those of Fabien Chalon.
- Fog procedural textures. A rich domain, see [Ebert], with several tracks::
. general gas modelling methods,
. transparency and movements issues,
. exponential forumals and Beer's law for an homogeneous fog.

Fold, folding. An error in analog signal digitizing, due to a weak sampling frequency. This phemonenon happens as well in music as in cinema. It may be avoided (in music) using anti-folding filters before the conversion, ans smoothing filters after it. - Sometimes synonym of Recess.
- Some passages in [Murray]. And a book by Deleuze. 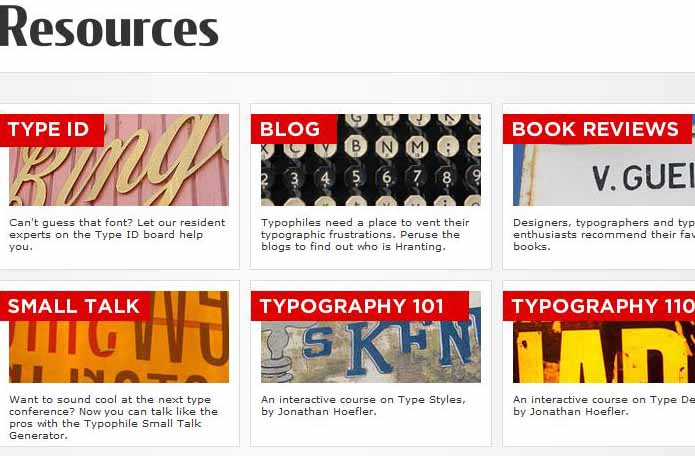 For... A control structure in programming.

Format. Organization and typical sizes of a device or system. Has a lot of senses, see Wikipedia.
- Files
. the format is indicated by the extension of the file name (generally three letters after a point), e.g. .jpg, .txt ...
- Graphic files
. the formats are explained on the daubnet website.
. in compositing, see [Brinkmann].
- Physical format
. hardware formats, for exampel PCMCIA cards, floppy disks, VCR cassettes, screens (form factors);
- paper formats, defined by DIN standards (A4 is the most used) and national standards.
- Media format
. the structure of a media and the kind of story or asset it can use. See for instance [Bernardo]. For example "... there was no precedent for formats being exported from Portgugal". 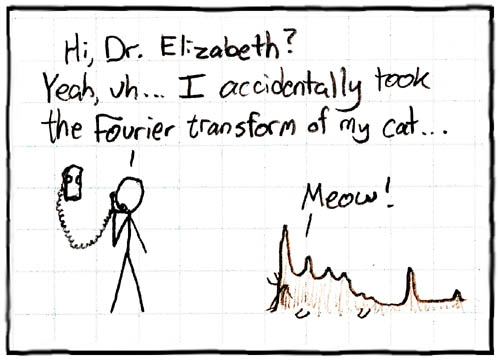 Humor about Fournier transform, on the website of XKCD. 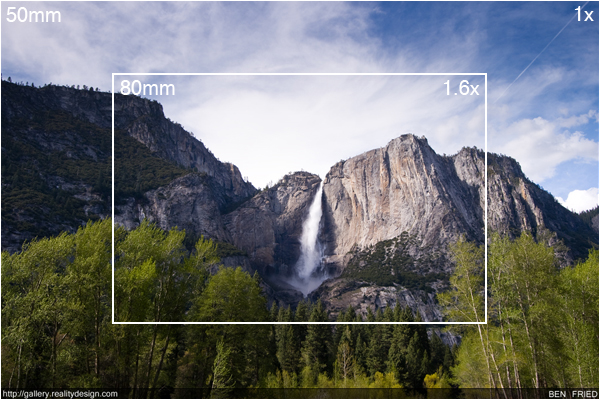 Framing is a major function, for aesthetic (composition) as well as meaning enhancement (suppression of less important or parasitic parts) reasons. It will frequently followed by cropping or clipping. These operations can be programmed (some trys in Roxame).

Fragmentation. See special notice.
- Fragmentation is a basic facet of digitization, complementary to Assembly or Compositing. - This word is not used in image processing literature.
- Fragmentation applies also to audiences. Electronic media tend to create "digital enclaves". Cass Stein (quoted by Jenkins): Web communities fragmente the electorate and tended to exaggerate whatever consenus emerged in the group".

Frame, framing.
- Mathematics [Agoston].
- Java. some problems with relationship between Frame and Image.
- Compositing [Brinkmann].
- How far can it be automated. Some solutions with the open-source software Open CV.
- More on French Cadrage.

Frameless video.
- A new mode of transmission towards a video projectof. See http://ideas.4brad.com/towards-frameless-clockless-video.

Franchise, franchising
- A major form of intellectual property.
- In transmedia.
- Franchising: "The coordinated effort to brand and market fictional content within the context of media conglomeration" (according to [Jenkins]).

Freeman's chain.
- Freeman's coding consists in following the border of an object and coding the elementary moves afforded by the chosen distance. [Bres] p. 324-325 , [Cocquerez] p. 54-55. 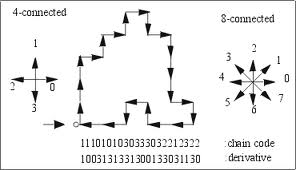 A Freeman's chain, according to Mathworks.com. 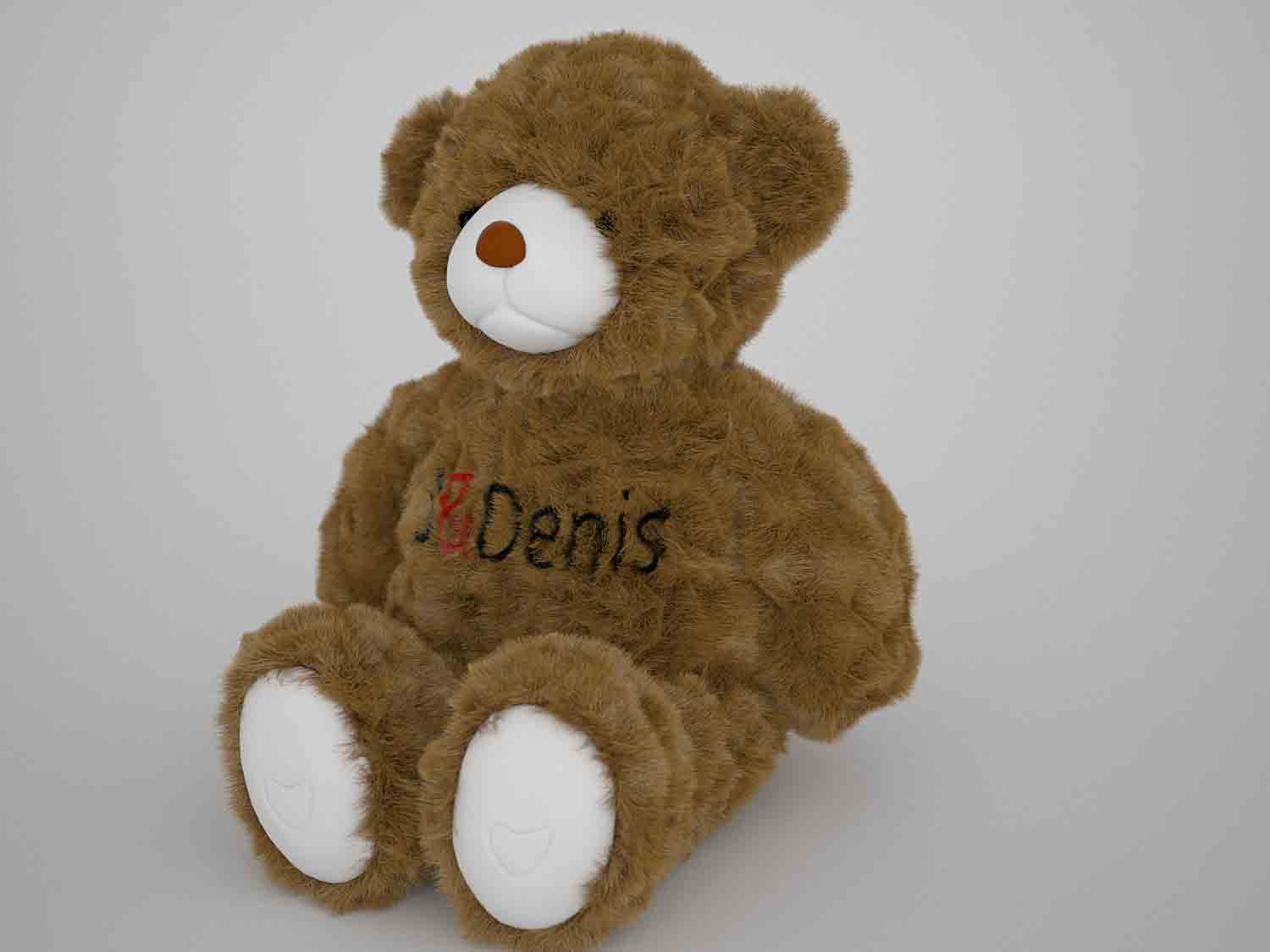 Fusion. [Cocquerez] deals on six pages with diffusion and fusion of regions.

Futurism. An art movement.
"... futurism, which emerged prior of all of these avant-garde movements and exerted significant influence upon them (particularly constructivism), deserves a much higher place in the history of digital arts and performance" [Dixon].

Fuzz, fuzzy. Many types and algorithmes. See for instance Photoshop.